I made the best gnocchi i've ever made. It was almost as good as claudio's. Gnocchi is such a touchy-feely kind of thing. I make it almost every day, and it turns out different almost every time. Today's was freaking amazing though. The dough felt like a young woman's breast. Just... awesome.

I've told work that I want to work day and night. Rather than look for a second job, I'll be working around 60ish hours per week at Al Porto, taking charge of pasta. So if you want me, come eat some pasta and visit the kitchen.

Who knows maybe I will even be able to blog about it a bit. Sometimes when I work a lot, I have trouble sleeping.

Hey, on the topic of work, a few things. I got to work with ramps for the first time ever last week. (or was it the week before?) Bourdain loves these things, but I'd never seen them available. The flavour is like a very strong garlic mixed with green onion. Very cool. I made Claudio's gorgonzola cream sauce, only I used the ramps instead of leeks.

Sweat the leeks in the butter and olive oil. When they are translucent, add the gorgonzola and push it into the bottom of the pot with a wooden spoon. Season with a tiny bit of salt, and a generous pinch of black pepper. Keep working the gorgonzola, pushing and stirring until it is melted. Now add the cream. Stir occasionally on low heat until it thickens slightly. Careful not to let it boil over.

Anyway, this sauce is really good with ramps instead of leeks. Unfortunately we couldn't seem to sell any. :(

Tonight I will probably be making some kind of morel mushroom sauce. Drool...

Here's a culinary inspiration for you! Chicken skin... ON PIZZA! :EVIL LAUGH: Now that is crazy CRAZY delicious.

Musically, I am really really digging this pop stream album that stephanie sent me. Epic psytrance ftw. I don't think I've heard an album this epic since Infected's Classical Mushroom back in 2000. Very good.

I've purchased(!) CATraxx for organizing my music collection. It is super awesome. So customizable. I've pretty easily integrated harmonic mixing support, as well as adding a custom field for BPM decimal, since not every track is an integer beats per minute. Now I just need ink for the printer so I can print out my new, standardized labels for my CD wallet. 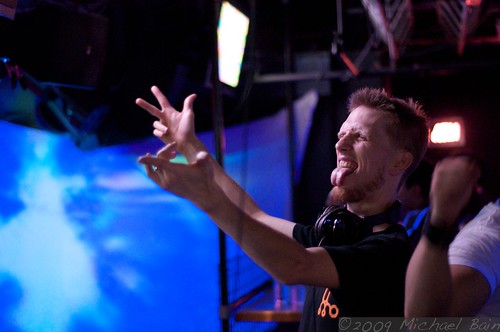 Although, i guess I've been having a lot of best weekends ever lately. This one started out with pasta domination on Friday night. Always good to leave work on a positive note, and banging out 100+ pastas in a few hours and getting lots of a compliments from the dining room is definitely what I call a positive note.

After that, I brought about 10 coworkers to Organix, where another 10-20 friends were there to meet me. It was there that I played these songs:
( Collapse )

It really really was my best ever set at Organix. You can download a recording of the mix from sunkid.ca. By about the 4th track, people were pretty much just screaming for every new twist, every new sample. It was really really gratifying. Almost 100% of that music is brand new too, stuff I've never tried out on a crowd before. A few people in attendance had gotten a sneak preview if they had been at Andrew Haan's house the weekend previous, where I tried some of the tracks out at the afterparty from Stephanie's set. BTW, the recording on sunkid.ca isn't a live recording, it is a reconstruction after the fact. That's why the encore starts right away, instead of having half a minute of silence while everybody cheers before I put on the last track.

Anyway, to say it was a success would be a huge understatement.

On Saturday I got up early (11AM) and headed for Wreck beach. It always takes longer to get ready for the beach than you expect. I can't really understand why but it took from 11AM until after 3PM to hit the sand. I met up with Nick, Aurora, Jules, Saf, Via, Adam and a bunch more people there and proceeded to have (slightly) too much to drink. Jeska arrived too. Getting wrecked on wreck is great. :)

Once the sun started to dip, we headed out and rora and nick invited us over to hang out for a bit. On the way we got more wine, and then they took us to a fantastic vegetarian restaurant on Main called The Foundation (or Foundry or something).

At Aurora and Nick's we watched Carl Sagan's Cosmos. Is it too feminine to say that I swoon for Carl? So good. Jeska and I crashed for a bit there then went home for more sleep.

Yesterday was Car Free Vancouver day, and we heard that there were 40 blocks closed off from car traffic in Kitsilano. Nick and Aurora and I decided to investigate. Super-silly adventures ensued. It turns out that those 40 blocks were scattered randomly throughout kits. We ambled all around, making fun of yuppies and yelling at cars and managed to find 11 of the 40 blocks. Oh and some absolutely AMAZING Okanagan strawberries. Yes! Strawberries so good, you can be admiring the visual beauty of one and then find yourself surprised to be eating it before consciously deciding to nom.

Anyway, after 4 or 5 hours of walking around kits, we get word from Julie that she's at the commercial drive car free day, so we decide to head over there. One crowded and uncomfortable bus ride later, we arrived at the huge street party. Commercial drive day is awesome. There was a dance party playing pretty decent electro and breaks. Hanging out there, we ran into Jules and some other friends. Jeska decided to take a break from her homework and come have supper with us.

We TRIED to go to a really REALLY cool seeming restaurant that I discovered on the drive called Lime. Lime is a Japanese-Spanish fusion restaurant. DO WANT! Unfortunately they were closing up early, so we'll have to go there another time. Instead we went to the Memphis Blues BBQ house on the drive for BBQ poutine. French fries with cheese, pulled bbq pork, and bbq sauce. :drool: I'm actually salivating right now just writing about it. Oh man, it was even better than it sounds.

Anyway yeah, so that was pretty much the weekend.

How was your weekend? :)

Am I EVER excited for my set tomorrow at Organix. This will be one to remember, I predict.

Art of Noize and Psionic Riot are two CD compilations that are kicking my head in lately. If you come to Organix tomorrow night, I'll show you why. I'll show you ALL why. muahaahhahahahahaha! (evil laugh)

What do you all think of the logo I just made for irken kitties? IK is the DJ affiliation that Safiire made up for himself, and then I asked if I could join.

Ooh, and if you're really into cyber-stalking me (or you just want some killer tunes), you can download an edit of the set that I played on the weekend: sunkid - Sunrise at Valacirca, May 2009

In any case, you definitely should come out to Organix on the 12th! I got booked on Monday, and am filled with excitement. Hence the new demo/dj pic/irken kitties logo, etc.

What a fantastic weekend. I wish I could pepper my post with images so as to better convey the awesomeness of Valacirca. Julie and I rented a 15 passenger van to take people to the party and we got underway around 7 on Friday night. Critical Mass definitely made the process of picking people up downtown very tricky. Note to critical mass participators: You're not making many friends when you screw over rush hour traffic. Just sayin'...

It was all good once we got underway though. In the end we left with eight happy party goers. We popped in

raliyn's new demo CD that he made specially for Valacirca and headed over the beautiful Lion's Gate Bridge. Fantastic soundtrack for a journey like this. He and I talked about DJing a bit. His first demo got recorded like my first few. Practicing the same mix, over and over until the best possible timing is found. I told him that he needs to check out MixMeister, which is perfect for finding those platonic ideal mixes that you want for your demo.

We stopped in Squamish to get some supplies, and met up with a couple of travellers who were very obviously on their way to Valacirca. "You guys need a ride to Valacirca?" "Really? That would be amazing!" "Hop in!"
Oh it was a good omen for the weekend, to be sure.

We finally arrived just as it got dark, which made setting up our camp a bit more difficult, but no problem. The tent that

glapaloopscap and I borrowed from Lisa is SO awesome. Super cozy and nice in the night (especially with the tent lamp that she also lent us) and it converts into such an airy wonderful little comfy bug shelter during the day- almost like a veranda or gazebo or something.

Meanwhile we are right next to Julie and her camping set up is EPIC. Camping TABLE FTW. Not to mention food and stove and chairs and Space Tribe Banner:

Yes, mandelbrots in the forest. By nightfall on Saturday we had two up, because

railyn has one too. I want one SO bad!

Where to begin with the party though? I mean some highlights:

My job as pasta chef just keeps making me happier and happier. I really feel like I've found the perfect fit. I actually asked to work a double-shift yesterday because they're making me so happy.
Collapse